"Zukofsky taught: The poet makes one long poem" is another one of Seidman's "14 First Sentences" in PEOPLE LIVE, THEY HAVE LIVES. Over the past two decades, Seidman's one long poem has been one of our most important poetic achievements.
--Lawrence Joseph
American Book Review

Seidman writes tough poems... They take their corners sharply, often going way over the speed limit. Yet they can stop on a dime, purr, suddenly levitate, and leave the reader gasping for air.
--Norman Finkelstein
Denver Quarterly

Seidman is one of the few poets for whom New York figures as an actual city rather than a location the Mayor's Verse Office is keen on pushing.
--Sulfur

People Live, They Have Lives

A pre-publication version of PEOPLE LIVE, THEY HAVE LIVES was judged the winner of the Camden Poetry Award from the Walt Whitman Center for the Arts (Camden, NJ). 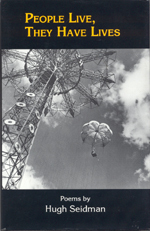 His close-set eyes seem wistful to the lovers,
Who think of the woods of Mr. and Mrs. Bear.

And Mr. Bear yields his silence to the lovers,
Like a secret to each at the ear.

Yes, the lovers are clarified after love
By Mr. Bear in his beneficence.

And they hold Mr. Bear in their arms,
And the electricity sparks off his coat.

And Mr. Bear is fiery under the universe of shadow,
And the little stars caress him.

And Mr. Bear outpours the ions of bear,
Charged with the volts of the lovers.

And Mr. Bear is the ancient philosophical bear
Before the Great and the Little Bear.

Though the bloody paw and muzzle
Lurk always at the force of the lovers.

But now Mr. Bear triumphs in beneficence:
Greatest dipper shining over the lovers.

To order directly from the author, click title in the "TO ORDER" column.